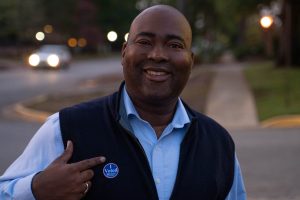 Lindsey Graham has served 17 years in the Senate, but Jaime Harrison is giving Graham a run for his money, literally.

Harrison, who is challenging Graham for his seat, has seen unprecedented financial support in recent months. Additionally, Harrison has also received endorsements from a bevy of Democrats including potential Vice President Kamala Harris and Majority Whip James Clyburn.

Now, a new poll is showing even more good news for Harrison. On Monday, The Cook Political Report shifted its Senate race projection for the state of South Carolina from “likely Republican” to “lean Republican.”

The shift comes on the heels of a Quinnipiac poll released this month that had Harrison and Graham deadlocked at 44%. However, Graham doesn’t seem too bothered by the pressure. According to The State, Graham has attributed Harrison’s gains in the race to “skewed polls and millions of liberal dollars from California.”

However, reports are showing that Graham’s favorability in Kentucky has dropped. Graham was known as a lawmaker who was willing to work with Democrats for the good of the country and was once a challenger of President Trump. However, since Trump was elected he has become a hardline supporter of the president.

Harrison, who represented Kentucky during the DNC roll call on Tuesday, said Graham used to get support from Democrats and Independents and Republicans.

“This new Lindsey Graham is not getting that type of support. And it’s because people want to send him home. They are tired of the pandering,” Harrison told Essence.

The Trump administration’s response to the coronavirus pandemic has also caused problems for Graham.  With a second coronavirus relief package on hold, many residents in Kentucky are almost down to their last dollar.

“Lindsey Graham’s response to this pandemic has made it clear: The people of this state are tired of an elected official more concerned about playing political games than he is about finding solutions to urgent problems,” Harrison’s spokesman Guy King said. “Every day, more voters are turning toward Jaime Harrison, who they know will bring back integrity and principled leadership to this U.S. Senate seat.”

Congresswoman Ayanna Pressley Continues to Push for Student Loan Debt Cancellation up to $50,000

Altcoin Alice skyrocketed by 60,000% in one minute

Cineworld closes cinemas in US and UK, collapsing 30% on the stock market

EUR/USD: one step from growth to fall. Greenback is in no hurry to run...

US dollar is unlike to rise as long as the market believes in new...

Chauvin’s Defense Attorney Wants The Jury To Be Hidden, Request Denied By...

Sheryl Underwood Speaks On ‘Healing’ After Sharon Osbourne’s Exit From ‘The...

The Top Four Highest Paid Quarterbacks in the NFL Are All...

Pfizer and BioNTech Will Apply for Emergency Use Authorization to the...