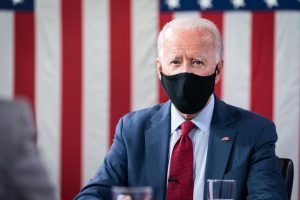 Democratic presidential nominee Joe Biden said his campaign will seek to cancel the commonwealth of Puerto Rico’s municipal debt and make broad investments in the island if elected.

On a press call with reporters Tuesday, Biden’s campaign said the former vice president would work to extend federal benefits to Puerto Ricans, protect workers’ pensions from budget cuts, and ensure that “debts illegally issued are canceled.” Additionally, Biden plans to increase investment in the country’s electrical grid and infrastructure, which is still suffering from Hurricane Maria.

Joe Biden’s presidential campaign said Tuesday it would look for ways to cancel Puerto Rico’s crushing municipal debt and make broad investments in the island territory if he wins the White House this November.

“Today’s a historical day for Puerto Rico and the Puerto Rican community,” Javier Cuebas, a Florida campaign director for Biden, said according to Yahoo Finance.  “No president or presidential candidate has ever provided a plan as comprehensive as the one we have in front of us.”

Biden’s campaign did not get into specifics on how it would cancel the island’s $129 billion debt crisis, or how much of that sum his advisers see as potentially illegal.

Carmel Martin, a senior policy advisor for Biden, said he hopes to reform rather than repeal Puerto Rico’s Oversight, Management, and Economic Stability Act in hopes to provide the fastest possible relief to the U.S. territory.

The 2016 law established the fiscal control board seen by many natives as a step toward a dictatorship.

“What we’ve done in this plan is lay out principles to a new approach to debt restructuring,” Martin said. “The vice president is open to approaching that in the way that’s most expedient for the people of Puerto Rico.”

Martin added Biden “was open to the possibility that legislative action may be necessary.”

Puerto Rico was conquered by the U.S. in 1898 and is the largest U.S. territorial “possession,” a status afforded to island holdings including Guam and the U.S. Virgin Islands. However, citizens on the island receive far less in welfare and fewer financial aid benefits, have no voting representation in Congress, and lack any say in the electoral college system that chooses the president.

If a citizen of Puerto Rico relocates to one of the 50 states, they can enjoy the full benefits of American citizenship, including votes that count in the electoral tally. Biden appears to be targeting the citizens who came to the U.S. after Hurricane Maria, which killed more than 5,000 citizens.

President Biden Promised To Lower Black Unemployment; A Year Into His...

See How Black Americans Are Profiting and Leading The New Digital...

The Rookie Officer Who Shot And Killed Tamir Rice Within Two...