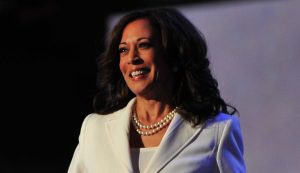 According to pool reports, Harris made several trips around the city but first visited with Blake’s family. Blake was shot in the back eight times by Kenosha, Wisconsin, police officer Rusten Sheskey last month. Harris spoke to Blake by phone and met with Blake’s father and sister along with other family members.

The meeting was not on Harris’ schedule and reporters did not know about the meeting until after it concluded.

“They’re an incredible family and what they’ve endured and they do it with such dignity and grace,” Harris said after the meeting, according to Madison 365. “And you know, they’re carrying the weight of a lot of voices on their shoulders.” She added that the message to the family from the campaign was “just to, one, to express concern for their well-being and of course, for their brother and their son’s well being and to let them know that they have support.”

“Today, of course, is Labor Day,” Harris said after the discussion. “And so part of the work that we’ve been doing today is to honor the men and women of labor, including — and we talked about this — the pride that Milwaukee and so many of us have in organized labor, and the Lieutenant Governor talked about that. What we must do to always support the working man and woman to be able to [have] collective thinking and collective bargaining and have all the wages and benefits that come with a hard day’s work. And the acknowledgment of the dignity of work.”

Harris also greeted fans and supporters outside the meeting, several of whom wore pink and green, the colors of the Alpha Kappa Alpha sorority, of which Harris is a member.

After her roundtable with Black biz owners in Milwaukee, @KamalaHarris walked out to address ~45 fans standing across the street. “I need your help in Milwaukee, OK? We’re going to get this done. Make sure everybody votes early, right?” @axios pic.twitter.com/NYiZBBseYR

“We’ve got to get this done, I need your help,” Harris told supporters. “Make sure everybody votes early, get your ballot by September 17, and October 20th early voting starts. That’s my birthday.”

Good Financial Reads: Financial Questions You Should Be Asking Yourself

Why Working with an Online Influencer is Vital for Your Brand? (Paul Baron knows why!)

Sad news for Prince Harry and Meghan Markle as they narrowly miss out on...

My Experience With Influencers As An E-Commerce-Vendor

Charlene White breaks down in tears on Loose Women over Downing...

Number 10 apologises to Queen for holding two parties the night...

Backdoor for Windows, macOS, and Linux went undetected until now

Learn How To Build Your Own Exciting Games With This Beginner-Friendly...