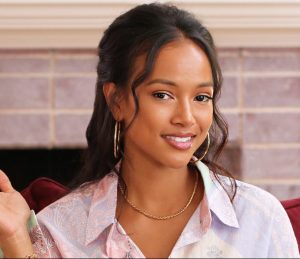 Karrueche Tran is writing the next chapter of her life on her own terms. Naysayers may have doubted her ability to rebound from her tumultuous relationship — and break up — with Chris Brown in 2015, but the 32-year-old actress has proven that her story is far from over.

Tran was working as a personal shopper and celebrity stylist back in 2011 when her life took a drastic turn. The Los Angeles native met Brown on a styling gig and was wooed by the RnB crooner two years after he pled guilty to felony assault of his then-girlfriend Rihanna. That career-defining incident was the start to Brown’s long rap sheet of legal troubles and reports of violent behavior. The quiet and reserved stylist was instantly immersed into a world of fame, headlines, and drama.

Their four-year on-and-off-again relationship was marked by public disputes and rumors of infidelity, which was amplified by the media and millions of fans on social media. Brown even briefly rekindled his old flame with Rihanna during their relationship, declaring that he was in love with both her and Tran. However, Tran’s relationship with the controversial singer officially came to a head in 2015 after he fathered a child with another woman.

After the split, many deemed Tran a Hollywood hot topic. Nevertheless, she embraced her newfound fame and turned the page in the story of her life.

Although the Vietnamese-African American beauty never desired a life in the spotlight, her manager convinced her to try acting. She eventually fell in love with the craft and landed small roles on a web series and in independent films and streaming shows. She also enrolled in acting classes.

The model landed her big break in 2017 with a starring role on TNT’s Claws as a fiery stripper-turned-manicurist alongside veteran actress Niecy Nash. The comedic drama series was an instant hit and is now in its third season. That same year, she began a longterm relationship former NFL star Victor Cruz. Tran also began a reoccurring role in Fox’s Deputy.

Today, she aspires to star in a motion picture film and an indie film. Outside of acting and modeling, she frequently lands hosting gigs, including the 2019 Environmental Media Association] Awards (EMA). She also uses social media platforms to advocate for racial justice issues and the Black Lives Matter movement to her more than 9 million followers.

With a focus on her promising career in entertainment, Tran is more ready than ever to tell her story. On Wednesday, she premiered “Stir It Up,” a new digital series on Facebook Watch that gives fans a behind-the-scenes look into her life. In the series, the Emmy Award-winning actress and producer opens up about her health issues, skincare routine, and love life while peeling back the layers to unveil her fun and quirky personality.

“I talk about my family, friends, my relationship,” Tran told BLACK ENTERPRISE, adding that she also addresses “growing up with scoliosis” and filmed an “episode with Victor.”

Tran will also use the new series to talk about her passion for fashion, food, and fitness. Her favorite part of the show, however, is being able to show the world another side of herself.

“I think what I love most is just being able to be myself and show my personality,” she says. “I’m just excited to see, you know, to have people see a different side of me.”

Tran also teased that she will address her high profile relationship with Brown.

“It was quite the roller coaster. But thankfully, you know, I took those mistakes and I took those lessons and I’ve learned from it.” One of the lessons she learned was self-love.

“It definitely shaped who I am today. And I think that’s the beautiful thing about life is that we all go through our own situations, our own journeys, stories,” she added.

“And that creates who we are and our individuality. And I love that. You know, we all have our own story to tell.”

Watch Karrueche Tran’s full interview on The New Norm with Selena Hill below.

Biden is Pushing For $15 Minimum Wage and More Stimulus Money

Technical Analysis of EUR/USD for November 25, 2020

Who will win in the confrontation between D. Trump and the USD?

Overview of the EUR/USD pair. December 3. Why does the euro continue to grow?...

Twitter’s stock market drops sharply amid controversy in the US

Biden Blinded by Offset’s Bling as The Migos Rapper and Common...

Trump Campaign Would Have To Pay $8 Million For A Wisconsin...