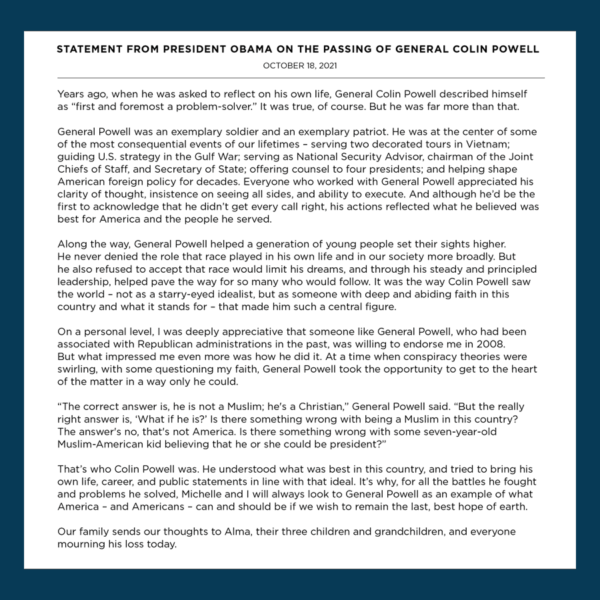 In the hours following news of his death on Monday morning, public figures from across the globe flocked to social media to pay their respects to Gen. Colin Powell, including actress Kerry Washington, his cousin.

Washington and Powell are related through her mother, Valerie.

Growing up, you were a phenomenal source of inspiration. Your accomplishments were tremendous. Your spirit was gloriously generous. From my family, our family, from my neighborhood, our neighborhood. Your legacy will continue to live on, in all of us. Rest In Peace #ColinPowell pic.twitter.com/TfVfBvJ2T4

A controversial figure to some due to his political career, Powell remained generally revered, celebrated for his many pioneering accomplishments and decorated military career. Until President Barack Obama took office, he was the highest-ranking African American man in the history of the federal executive branch, having served as the first Black Secretary of State.

“Although he’d be the first to admit he didn’t get every call right, his actions reflected what he believed was best for America,” the former president wrote. “Along the way, General Powell helped a generation of young people set their sights higher. He never denied the role race played in his own life and in our society more broadly. But he also refused to accept that race would limit his dreams.”

Even from a professional standpoint, Powell’s impact was felt far beyond the political world. As news of his death spread across the globe, thousands of mourners shared anecdotes of their personal connections and interactions, including Jeffrey Wright, who played Powell in the biopic W.

I played Colin Powell. Never met him. Immigrants’ son, family man, scholar, leader, statesman, a ‘good soldier’ maybe to a fault and like many of them, ultimately, I think, betrayed. Maybe he flew too close to the sun. Whatever’s made of his legacy, he worked at redemption. RIP

Not all of the reactions to Powell’s death have been positive. Many continue to hold him responsible for delivering misleading intel to support the United States’ decision to invade Iraq, a decision he called “a blot on my record” in a 2011 interview with Al Jazeera.

Artist and activist No Name alluded to this in a post on Monday that seemed directed at Powell’s legacy.

under white domination we consistently celebrate the “first black …” because we’ve been taught that assimilation into white society means safety, upward mobility, liberation. beyond how this can lead to black children idolizing the first black billionaire or war criminal,

Survey: No-Annual Fee Credit Cards Most Used By Baby Boomers and Millennials Than Other Generations

The ‘Weight’ Is Over! 5 Cyber Monday Deals To Help You...

A Generation Of Black Golfers Are Standing On The Shoulders Of...

A Holiday Guide to Running Your Social Media Campaign

Unique Christmas Gifts For The Mom-To-Be

Rapper T.I. Fined $75,000 For His Involvement in Cryptocurrency Scam