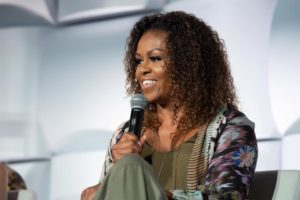 On the latest episode of The Michelle Obama Podcast, the former first lady states that based on how the current president has run his administration as opposed to how President Barack Obama handled his, that as Black Americans, they “could’ve never gotten away with some of the stuff that’s going on now” in the White House because our “community wouldn’t have accepted that,” according to The Hill.

The latest episode was the season finale of The Michelle Obama Podcast. It was released on Wednesday with her guests, her older brother, Craig Robinson, and their mother, Marian Robinson, in an episode titled “Family Ties: On Raising Kids with Craig & Marian Robinson.”

The family members were discussing race and what is expected of Black people in the world we live in when it comes to expectations.

“When Black folks, you know, what a lot of folks who are not in our position don’t understand is that, this is such a way of life,” Obama says, “When it comes to interacting with the rest of the world, it doesn’t matter, you know who you are, and what kind of values you have, you know, nobody, thinks about, you know, the fact that we all come from good families that are trying to teach values.

“But, when you leave the safety of your home and go out into the street, where being Black is a crime in and of itself. We have all had to learn how to operate outside of our homes with a level of caution, and fear because you never know.

“And we grow up, having to have conversations with our children, because almost everybody I know has had some kind of incident where they were doing, just minding their own business, but, living Black, and got accused of something.”

Obama later discussed how Black people have to do better based on the perception of people outside the community.

“You’re taught people are gonna assume the worst of you. So you’ve got to be better than, you’ve got to be 10 times better than. And when we were in the White House, we didn’t, we could’ve never gotten away with some of the stuff that’s going on now. Not because of the public, but our community wouldn’t have accepted that.

Brush Up On Your Google Skills With This $40 Bundle

5 Ways to Make Your Next Budget a Success

Reading on the Road: Five books to inspire a trip to Morocco

Will the Influencer Marketing Bubble Burst?

Amazon America Marketplace Spotlight: What You Need to Know

HelloFresh is an international meal-kit company that provides healthy and fresh...

After Backlash, Salesforce Increases Minority Hires With a Focus on Black...