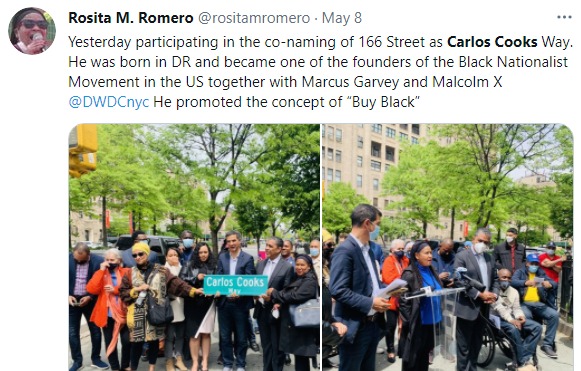 The northeast corner of West 166th Street and Broadway in New York was co-named Carlos Cooks Way on May 7, 2021, to honor the legacy of Black Nationalist Carlos Cooks, according to The Black Star News.

“Cooks was introduced to Marcus Garvey’s Black Nationalist fraternal organizations, the Universal Negro Improvement Association (UNIA) and African Communities League, by his uncle and father, who were among the many St. Martiners who were Garvey followers,” The Black Star News reported.
At age 19, Cooks was officially recognized by Garvey and became a vital member of the movement.”

Not everyone has heard of Cooks, despite his history of once being highly regarded as a key activist. The Moguldom Nation said that Cooks was an important figure in the Black Nationalist movement.

“In many ways, he was the successor to influential Pan-African activist Marcus Garvey. Despite the major role Cooks played in the movement, he is not often remembered today,” The Moguldom Nation previously reported.

According to The Moguldom Nation, Cooks was born in the Dominican Republic on June 23, 1913. In 1929, Cooks moved to New York because he wanted to pursue higher education. Cooks’ leadership of the African Nationalist Pioneer movement entailed challenging popular thought in exchange for hardcore Black power.

“According to Cooks, the only way to secure a free future for Black people was through Black nationalism. In the African Nationalist Pioneer Movement’s national manifesto, he wrote, “The Black man, if he has any desire to survive, will have to embrace Black Nationalism — TOTALLY!” The Moguldom Nation also said.

The Pan African Alliance recalls that Cooks is known for many things, including administering the Advance Division of the Universal Negro Improvement Association (UNIA), after Garvey was deported.

Additionally, when it comes to the phrase “buy Black,” guess who is known for originally coining it? Cooks.

Hair Conking; Buy Black was one of his public lectures in 1955. During that time, Cooks talked about ‘The Buy Black campaign.’

This Single Mom Retired By 50, And Built a $1.3 Million Net Worth While in the FIRE Movement

Amazon Links Up with Pharrell Williams and Georgia Tech to Launch ‘Your Voice is...

Single Mother Charged With Working While Her Kids Were Alone In...

Did Donald Trump Actually Have His Pants on Backward?

A Viral TikTok Video Explains The Painful History Attributed To The...

This $35 Course Bundle Will Teach You One of the Most...