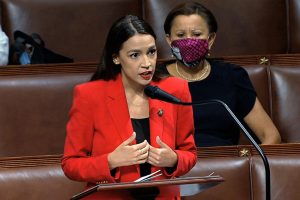 New York Congresswoman Alexandria Ocasio-Cortez has introduced two amendments to an appropriations bill before Congress, which would defund two new Trump administration rules before they can take effect.

According to Bloomberg News, the legislation would stop federal funds from being used to implement or adopt the new rules proposed under Housing Secretary Ben Carson that ease enforcement of policies meant to reverse segregation and housing discrimination.

If the amendments are passed it would be a setback for President Trump, who has made housing segregation a new battle in his reelection bid.

“We must hinder President Trump’s efforts to segregate communities and to discriminate against Black and Brown homeowners and renters,” Ocasio-Cortez said in a statement provided to CityLab. “We cannot return to the days of redlining and white flight.”

The Trump administration introduced a rule on July 23, concerning a provision of the Fair Housing Act of 1968. Federal enforcement of the “Affirmatively Furthering Fair Housing,” rule has been inconsistent over the last 50 years but in 2015, President Obama introduced a formal rule outlining how jurisdictions should assess and demonstrate their progress in easing segregation in their communities.

However, Carson, who considers the AFFH rule “social engineering,” has been trying to scale back the rule since he joined Trump’s cabinet. First, the Department of Housing and Urban Development deemed compliance with the AFFH standard too burdensome then introduced a draft rule in January that would require less work from local jurisdictions.

However, when Trump took an interest in housing earlier this summer, the agency introduced a new rule that would eliminate the AFFH process all together. Additionally, a second proposed rule would change how HUD deals with cases alleging disparate impact, meaning discrimination arising from policies that are explicitly neutral.

The draft rule introduced by HUD last August would make it harder for tenants, home buyers, and other plaintiffs to pursue discrimination complaints under the Fair Housing Act. Neither rule is law yet, as they haven’t been published in the Federal Register.

Should you move right now? Real estate experts give us the scoop

The Washington Post Appoints Its First Black Woman To Become A...