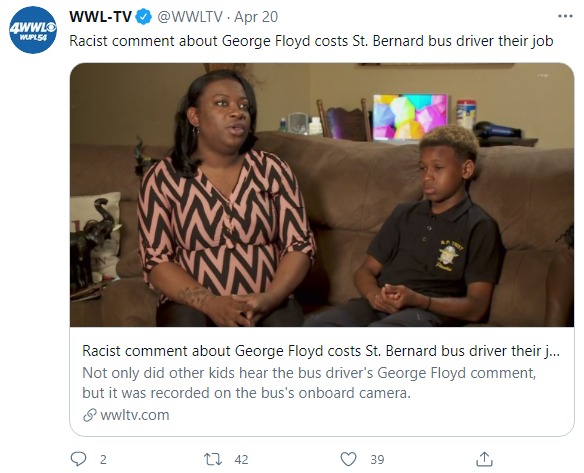 A bus driver in New Orleans is out of a job for making racially insensitive comments to a Black child in Louisiana. WWL-TV reported that Rose Gabriel did not let something her son revealed to her pass by. She informed the school system last week that a George Floyd-related comment was made to her 11-year-old son, Rashad.

According to the news station, Rashad informed Gabriel  that the bus driver, who is white, scolded him after his face mask slipped below the sixth grader’s nose. Rashad reportedly commented that he was out of breath, due to running to catch the bus to Trist Middle School that morning.

“Gabriel recounted what the driver said: ‘Since George Floyd, that’s what you all say, but I don’t see a knee on your neck,’” according to WWL-TV’s news report.

In the story, it was also stated that other bus riders heard the bus driver’s George Floyd comment that was also capture by the school bus’s onboard camera. During the interview, Gabriel also stated that she struggled to address her son’s bewilderment.

“I just started crying. Because she….excuse me. Don’t make him feel inferior. He’s not inferior to nothing. He’s equal to any of those students on that bus,” Gabriel said, according to WWL-TV.

The news station said that Gabriel drove her son to school the following Monday, then reported the school bus driver’s comment. However, the driver did admit to making the comment. The issue reached  School Superintendent Doris Voitier’s desk.

Attorney General Daniel Cameron Is Gearing Up To Run For Governor...

Johnny Depp and Amber Heard trial – when does it end?

Being a mother: how to survive and embrace it by an...