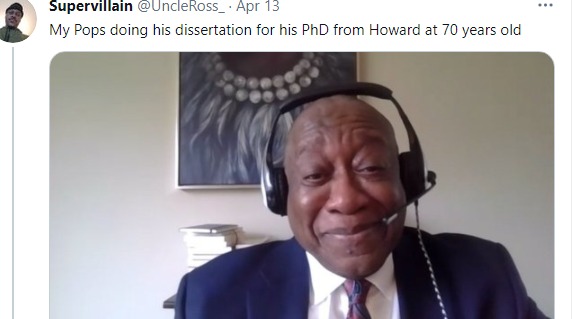 Seventy-year-old Joseph M. Grant refused to allow age stop him from achieving his academic dream of graduating this year from Howard University with a doctorate in political science with a focus on American government and Black politics.

“I always wanted to go to Howard; literally all my life. This is my first HBCU experience,”  Grant told Howard University Newsroom interview.

Grant had always wanted to study political science and teach. He began his doctoral journey in 2015, at 65 years old. Grant moved from South Carolina to Washington, D.C. The late Gary Harris, Ph.D., the former dean of the Graduate School at Howard University; Elsie Scott, Ph.D., the director of the Ronald W. Walters Leadership and Public Policy Center; and his younger classmates all supported Grant’s academic journey.

There were roadblocks along the way. Grant experienced a subdural hematoma, requiring him to take time off which delayed his studies by two years.

“After the surgery, my ability to read and comprehend was much less than it was before the surgery. I had to learn to hold a knife and fork and I had major confusion and memory loss. I could not comprehend what I read, nor understand its importance to what I was trying to do. My surgery altered my course of study, and seriously threatened my ability to complete my program. I almost died,” Grant told Howard University.

Grant’s perseverance was well-received on social media, after his son tweeted about his father’s scholarly pursuits.

A flood of comments poured in about Grant’s inspirational testimony. When Grant’s son also announced his father needed a graduation robe, Twitter users responded again. The issue was resolved.

“Please make sure to post pics. Tell him I’m proud of him.  He’s everybody’s pops now :)”

Popeyes Introduces Chicken Nuggets to Its Menu, Is Another Chicken Frenzy On The Way?

Zoombombing countermeasures are ineffective in the vast majority of cases

History of Seductive Women Who Made Smoking Popular and Cool — Torches of...

How can we change people perception of anything?