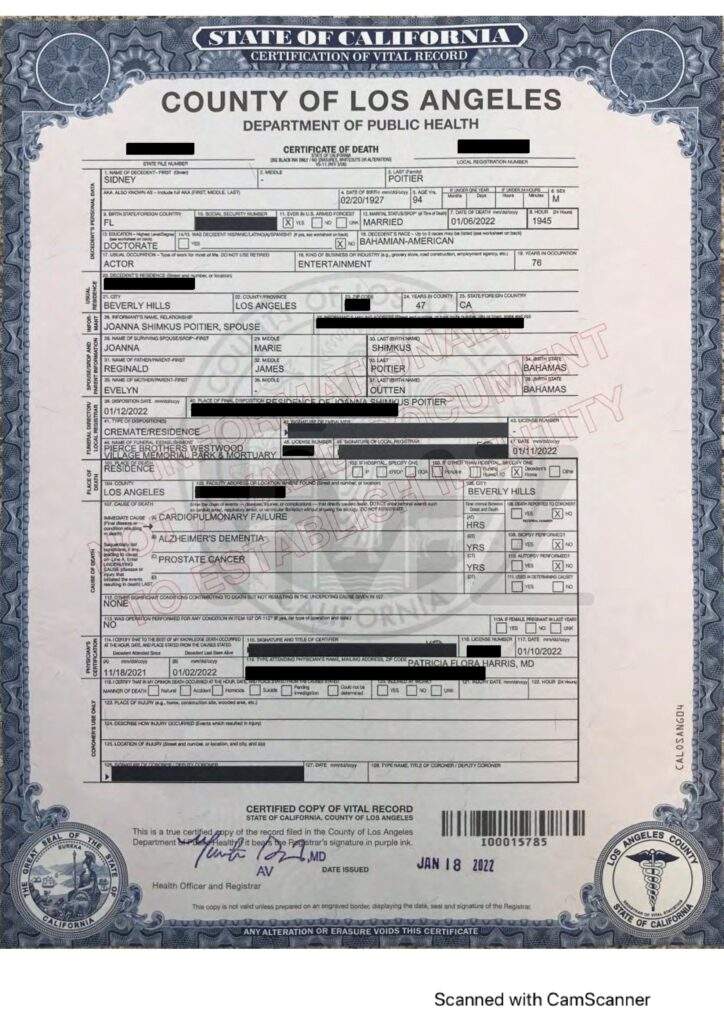 In just over a week after the news of Sidney Poitier’s passing, his cause of death has been revealed alongside a copy of his death certificate.

TMZ first reported that the iconic actor died from a combination of heart failure, Alzheimer’s dementia, and prostate cancer.

According to the official certificate obtained by TMZ, Poitier died on Jan. 6 at the age of 94 at his Beverly Hills home of cardiopulmonary failure. It also indicated that he had suffered from the underlying issues of Alzheimer’s dementia and prostate cancer over the years and that Poitier would be cremated.

Additionally, the document noted his occupation as an actor with an astounding 76 years of experience in his professional repertoire. Poitier’s career marked major firsts: the first Black man to win an international film award at the Venice Film Festival in 1957, the first Black man to play a romantic lead in 1961’s Paris Blues, and the first Black man to be nominated for Best Actor at the Academy Awards in 1958, as previously reported by BLACK ENTERPRISE.

In 1963, Poitier notably became the first Black man to win an Academy Award for Best Actor, a trailblazing accolade that he won for his role in Lilies of the Field. He rose to the top in his industry and paved the way for the next generations of Black artists who followed.

Poitier’s memory has been celebrated by fellow industry celebrities for his milestones of excellence on-screen and commemorated by friends and family for his activism, positive influence, and graciousness off-screen.

“We know how graceful and wise he was. How powerful his strength of character and moral fortitude. But what I really want people to know is how GOOD he was,” his daughter, Sydney Poitier, wrote in a heart-wrenching tribute on Instagram last week.

“I know people know he was good, but I don’t think they know the depth of his goodness. That it permeated every cell of his being,” she wrote. “It’s his goodness that changed the world, and it will live on forever.”

Thinking about selling your Echo Dot—or any IoT device? Read this first

Rep. James Clyburn Says He Pushed Biden About Nominating A Black Woman For The Supreme Court Before Giving Endorsement

Join Iberdrola to Scale Your New Sustainable Materials for the Electricity...

The Queen travels around Chelsea Flower Show in a buggy amid...

Cryptocurrency’s Reputation Is Pulling In Black Americans And The LGBTQ Members...