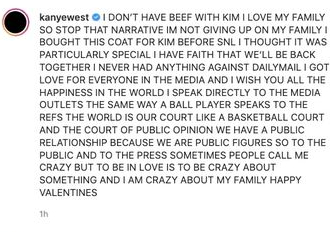 Kanye West’s unpredictable behavior has him in the tabloids and gossip pages as the combative billionaire has gone on the warpath with his estranged wife Kim Kardashian’s current beau, Saturday Night Live’s Pete Davidson.

The erratic musician and fashion stalwart has been sending and posting private, now-deleted texts between him and his ex-wife vowing to “be back together” even though Kardashian has carved out a new path to peace.

Although the eccentric producer is no longer claiming that he can’t see his kids, as evidenced through his daddy Super Bowl date night with his children, Ye seemingly has a new mission to make amends with matrimony.

Ye, who is known for going on social media posting sprees and then deleting the posts, has picked back up on that practice. According to a recent Instagram post, the “Heartless” rapper is seriously yearning to be back with Kardashian and their children.

Also, in a since-deleted Valentine’s Day Instagram post, Ye insists that he does not have beef with his estranged wife, and he does have “faith” that they will, once again, be together.

“I DON’T HAVE BEEF WITH KIM I LOVE MY FAMILY SO STOP THAT NARRATIVE. I’M NOT GIVING UP ON MY FAMILY…. I HAVE FAITH THAT WE’LL BE BACK TOGETHER”

Yahoo has reported that Ye had a truckload of roses delivered to Kardashian on Valentine’s Day.

“MY VISION IS KRYSTAL KLEAR”

But in the same vein, Ye launched a series of posts targeting Davidson, which has Kardashian concerned that Ye might cause one of his faithful followers to hurt the comedian.

Ye took aim at Davidson in several ways, including posting a picture and making unsolicited comments about his tattoo of former first lady Hillary Clinton with the caption:

“Y’all seen that tattoo, but if I speak up, then I’m crazy. I told you not going to use that one no more. When a garbage man goes to work, he gonna smell like trash. But it’s time to take the trash out the house,” he said.

He also posted a fight night poster of him and Pete Davidson, who he refers to as “Skete.”

He captioned the photo, “This ain’t about Skete [Pete], people. It’s about selling y’all a narrative. Skete just playing his part in Frozen 3 — except it’s not in the theaters. This time, it’s on Daily Mail. Tell Bob and the entire Disney staff you wasted your money on Star Wars and Marvel — because even though it makes money, you will never control the high schools.”

In a series of private texts, Kardashian pleaded with Ye to stop posting the exchanges, which he refused to do and continued to out her.

Ajayi continues: “We’re being entertained by Kanye’s antics but I feel for the mother who is watching her kids’ father melt down and using her as target practice. And for the woman who sees the whole world celebrating her tormentor.”

I feel for Kim. This public spectacle and ridicule from Kanye is so much.

The drama might be entertaining but can you imagine how she’s feeling that the father of her kids is doing all of this publicly? He’s relentless. It’s so embarrassing.

— Luvvie is the #ProfessionalTroublemaker (@Luvvie) February 14, 2022

Others are calling out Ye, and even though he has mental health issues, support for him has waned.

Kanye West is bullying a 20 yr old woman and stalking his estranged wife, stop making excuses for his foolery. He needs professional help.

It has also been reported that Ye and actress Julia Fox are no longer an item but “remain good friends.”

Fox’s representative confirmed on Monday that the pair had gone their separate ways: “Julia and Kanye remain good friends and collaborators, but they are no longer together.”

“I have love for him but I wasn’t in love w the man,” Fox wrote in the message.

How to Extend the Reach of Your Insights With Data Storytelling

How to Build a Content Strategy for Small Businesses

Roland Martin, McDonald’s Team Up To Offer $100,000 In Scholarships To HBCU Juniors And...

The State of Sustainability: From Venue Perspectives to the ‘Pandemic Effect’

The tech sector teardown is more catharsis than crisis

5 most breathtaking Baguio sites showcased on The Broken Marriage Vow

This Atlanta Entrepreneur Builds Nearly Seven-Figure Business While Giving Back To...