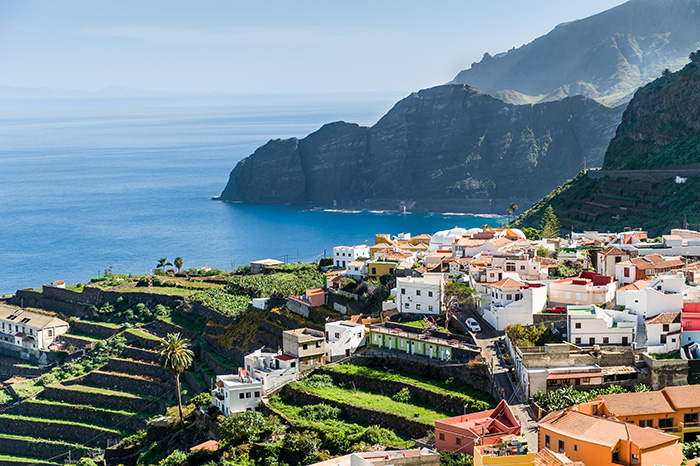 Much like the bright yellow bird that takes its name from the Canary Islands, we’ve got a song in our hearts for the wonders of Tenerife. Did you know that it’s the largest of eight islands and the southmost region of Spain? With balmy year-round temps it’s easy to see why so many people (12 million per year!) flock to the sunny isles off the coast of northwestern Africa. This beautiful archipelago is made up of Tenerife, Gran Canaria, Lanzarote, Fuerteventura, La Gomera, La Palma and El Hierro.

Making the most of your time is not just about lazing on golden sands — though that’s included and does sound very good right about now. Tenerife is also home to Mount Teide, the third tallest volcano in the world, and just one of the invigorating hikes you can take on the island.

Before you grab a bag and head for its hills, here are a few more cool things to know:

The yellow songbird springs first to mind, but the name Canary Islands has more to do with our furry dog friends. Whether it’s because Gran Canaria is said to have had “vast multitudes of dogs of very large size” or that its original people were dog worshippers, the connection to canines remains. Dogs are even featured on the island’s coat-of-arms! As for the native Serinus canaria, the bird takes its name from the islands, not the other way around.

Look up and you’re bound to see all kinds of bright yellow food tubes. More bananas are grown in Tenerife than any of the other islands. But that’s not the only reason to look to the skies! Thanks to good atmospheric conditions, the Canary Islands are home to two professional observatories including the Teide Observatory in Tenerife. Their giant telescopes and astronomers are credited for discovering more than a few minor planets.

Considering it hosts more than 5 million visitors per year alone, Tenerife needs to keep an eye on tourist impact. It is home to two UNESCO World Heritage Sites including Teide National Park, where you can hike managed trails through the lava slopes of a 16km-wide crater to reach the viewpoint on Samara Peak. They also boast a UNESCO Biosphere Reserve at Anaga Rural Park, where ancient mossy forests lead you to prehistoric cave dwellings.

One foot in front of the other is the best way to take in most of Tenerife. But there are a few spots where you’ll want to be out on the water. After a drive to the remote (and remarkably pretty!) village of Masca and a hike down Barranco Canyon to the sea, hop on a boat to take in Los Gigantes. Also known as the “Devil’s Wall,” these cliffs rise 600m out of stunning blue waters. If that’s not enough time at sea, you can also catch a ferry and hop from Costa Adeje to neighbouring island, La Gomera.

Second only to Rio, Canary Islanders know how to celebrate. In February they host the Carnival of Santa Cruz de Tenerife, which attracts party people from all corners of the world. They get all costumed up and dance the nights away, until it’s time to ‘bury the sardine’ on Ash Wednesday. Don’t worry, it’s a symbolic gesture meaning it’s time to let go of the past and welcome life with new vigour. When can we get started?

Ready to take a few life-affirming walks up summits and down to the sea? G Adventures gets you there on our Hiking the Canary Islands: Tenerife, Anaga and Beyond tour!

Does it make sense to expect USD downtrend?

EUR/USD. Flat and apathy: Powell unable to stimulate the pair. Focus is on Fed minutes

The Symbiotic Relationship Between Corporations and their Stakeholders

Bucket List: Top 15 Best Things to Do in Tacoma, WA