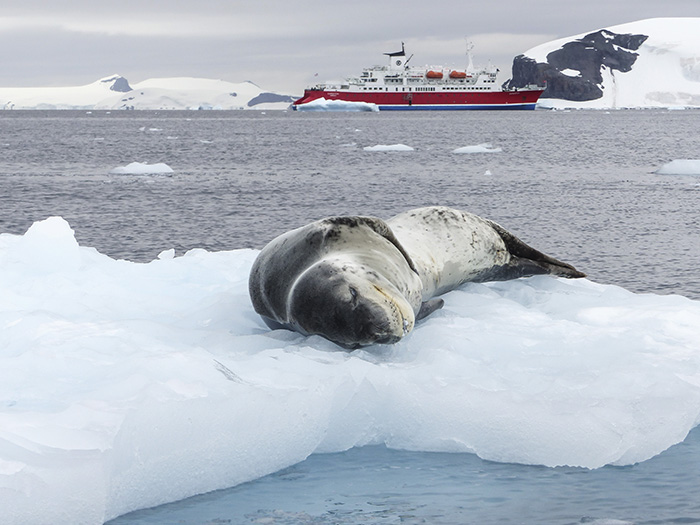 Where to see seals, sea lions and walruses on tour

Did you know that pinnipeds (seals, sea lions and walruses) can be found on every continent on earth? It’s true. Our flipper-footed friends spend most of their time in the water but come on land regularly to rest, mate and give birth. Whether it’s a snoozing leopard seal hauled out on ice or a rambunctious sea lion pup on the beach, they’re always a joy to see. Read on as we share a few fast facts and where to find a few of these tube-shaped swimmers around the globe.

Fast facts: One of the biggest predators in Antarctica, second only to orcas, and known to be rather feisty. They’re also pretty big at up to three metres in length and have a snake-shaped face. You can find them lazing on ice floes in the waters of the Antarctic Peninsula and South Shetland Islands.

Look for them on: Antarctica Classic in Depth

Fast facts: Imagine chunks of ice with even chunkier sausage rolls resting on top. At the Jökulsárlón glacier lagoon near Höfn, you can hop on a zodiac or amphibious vehicle to cruise by harbour seals sunbathing on the bright blue ice.

Look for them on: Complete Iceland

Fast facts: The Galápagos Islands are rare in that the animal residents don’t tend to fear humans. The Galápagos sea lion (Zalophus wollebecki) is smaller than its California cousin and is known to swim, frolic and rest near visitors without batting an eyelash.

Look for them on: Galápagos – West and Central Islands aboard the Reina Silvia Voyager

Fast facts: These tusked lovelies are the largest seal species in the Arctic and second largest in the world. From zodiacs and the G Expedition ship, you can keep an eye out for their baked bean bodies hauled out on ice floes and sandy beaches.

Look for them on: Realm of the Polar Bear in Depth

Fast facts: By stopping in Kaikoura, a coastal town on the South Island, you can answer ‘why not both?’ to spotting New Zealand sea lions and fur seals. The latter (aka kekeno) tend to hang out on rockier perches and are distinguished by a pointier nose, long pale whiskers and smaller size. They also look nearly black when wet and are very cute!

Look for them on: Highlights of New Zealand

Bucket List: Top 15 Best Things to Do in Obidos, Portugal

Kate Middleton fails to impress husband Prince William with her DJ skills as he...

This UK Entrepreneur Is Bringing His Haircare Line For Black Men To The US...

Biden’s Town Hall Received 1 Million More Views on ABC Than Trump Did on...

The Importance of Design in eLearning

Naomi Osaka Withdraws From Wimbledon To Spend Time With Family And...

10 of The Best Food Quotes for Instagram Caption (With Images)

A Guide to Motomachi Neighborhood in Hakodate, Japan