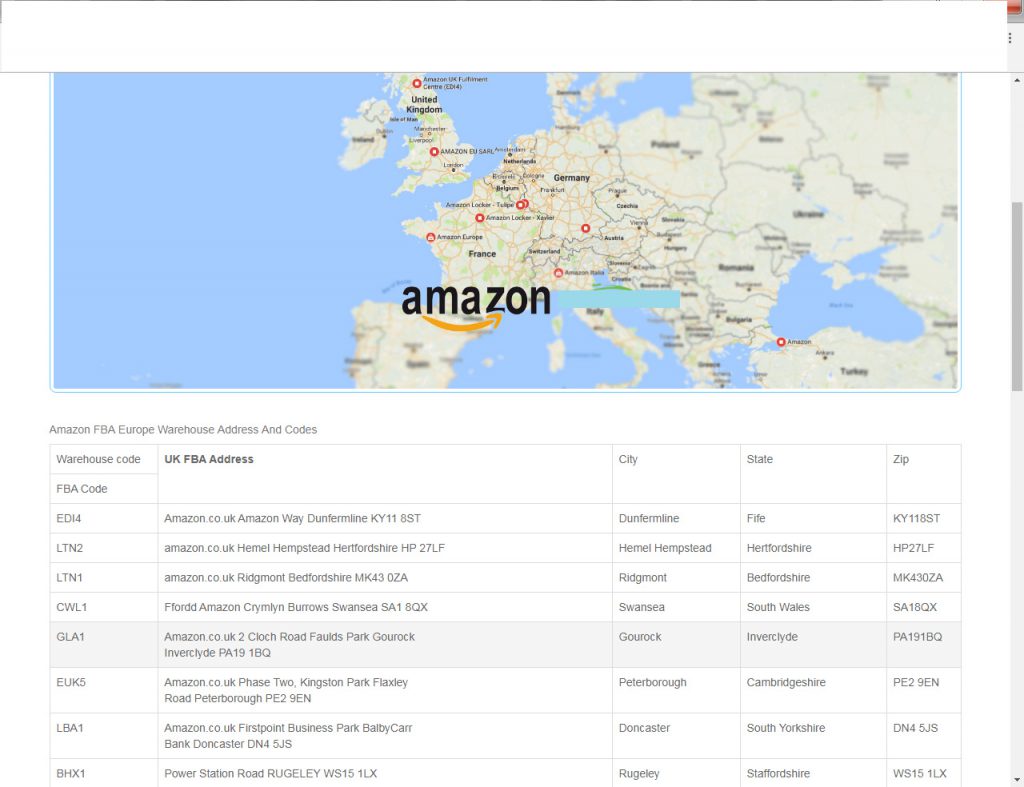 The U.S. and Europe have a longstanding economic relationship, accounting for over 33 percent of global GDP. If you are an Amazon seller marketing only to the U.S. and not Europe, you are missing out on a significant transatlantic opportunity in the Amazon Europe marketplace.

In this post we take a look at the Amazon Europe marketplace, including:

Be a Pioneer in the Amazon Europe Marketplace

Why sell in Europe? As Amazon points out, the U.K. and Germany represent some of the largest ecommerce countries. Amazon reported over 2700 products sold per minute in Europe in 2020.

Of course, the pandemic has made eCommerce an even more vital part of the European economy, a trend that is likely to continue even post COVID. The European market not only represents significant potential for you to reach new customers and generate sales, but represents a significant opportunity to diversify your revenue streams and improve cash flow.

A Brief History of the Amazon Europe Marketplace

Not surprisingly, Amazon is one of the biggest eCommerce companies serving Europe. Indeed, Amazon started operations in the United Kingdom and Germany in 1998, only three years after its founding as an online bookstore in the U.S. France was next in 2000, followed by Italy, the Netherlands, Spain, and Turkey, with Sweden in late 2020 and Poland in 2021 (though it has been operating there since 2014) as the latest additions.

An Amazon Europe Marketplace account can enable you to sell not only in these countries, but the 28 marketplaces they reach throughout Europe. Note, however, that there are new requirements for selling in the U.K. and Europe due to Brexit. Also, tax requirements vary among various European countries as well as product standards. There are also language differences, obviously; listings and customer support must be in the local language of each marketplace.

How Big is the Amazon Europe Marketplace

eCommerce News reports that Amazon employs about 50,000 permanent employees in Europe, with a network of 31 fulfillment centers and 1300 warehouse units located near major cities. Regarding the influence of Amazon in Europe, eCommerce notes, “Amazon is one of they key eCommerce players many small and big retailers keep an eye on…If it starts offering a certain service (like faster delivery), many online retailers will soon follow, because they don’t want to lose more market share to Amazon.”

According to a company press release, SMBs comprising around 185,000 businesses on Amazon Europe sold more than 1.8 billion products in 2020. Home, health and personal care, toys, beauty and apparel represented the top five sales categories. Amazon claims to have created more than 550,000 jobs in Europe.

So, in answer to the question of how big is the Amazon Europe marketplace: it’s pretty darn big. And it represents opportunity not only to European-based sellers who can attest to its value, but those from North America as well.

Note: Sources for country information include Sermondo, The Guardian, Statista, Hellotax, Business Insider, and  ecommerceDB, as well as Amazon.

Let’s begin with the marketplace in which U.S. Amazon sellers share a common language (despite sticking a “u” in words like “labour”). Over 3200 SMBs surpassed $1 million in sales for the first time in 2019.

Germany is the largest Amazon marketplace in Europe, second only to the United States worldwide. German based SMB export sales were up by 15% in 2019 over previous years.

France is the third largest Amazon marketplace in Europe with more than 152 million visitors per month. Nearby countries, for example Belgium, account for a small share, but buyers are predominantly in France.

A February 2021 survey found that 37 percent of respondents reported buying on Amazon several times a year, with three percent who bought from Amazon once a week.  Fun fact: 60 percent of French users won’t shop on foreign websites.

In 2018, Amazon partnered with French retailer Monoprix for grocery delivery through Prime Now app and a dedicated store on its website.

Amazon broke into Turkey’s eCommerce market by launching its full marketplace operation in September 2018. It is the second most popular eCommerce site in Turkey. Turkey is the 20th largest market for eCommerce with a revenue of US$11 billion in 2020, placing it ahead of Switzerland and behind Poland.

Amazon Italy is by far the leading eCommerce site in the country, with 180.5 million visits in 2020. The closest competitor is eBay Italy, with only 76.9 million visitors. Net sales are primarily in Italy, with a small share in France and Switzerland. SMB export sales in 2019 increased by 20% over previous years.

Spain reported its highest revenue in 2020, in part probably due to the pandemic. Amazon has the highest penetration share of online retailers, with about 80% of online buyers. There are over 9,000 Spanish based SMBs selling on Amazon in 2019, up 30% from previous years.  One possible barrier to entry: Spain is the most difficult VAT registration of all European countries because they have to be notarized in very specific ways.

Although Amazon Netherlands was launched in 2014, it only sold ebooks and Kindle readers. A full fledged Amazon with a wider range of product categories as well Prime service opened in March 2020. It is currently ranked as third in the eCommerce and shopping/marketplace category.

Fun fact: While not as populated as other European countries, 96% of the population in Holland are internet users and 93% of those in the 25 to 45 year old age group orders goods and services online, making it the third largest European market for ecommerce.

Amazon Sweden was just launched in October 2020, offering some 150 million products in 30 product categories. It is the first Amazon storefront to open in the Nordics. Over 70% of the population, or 8.1 million people, are reported to shop regularly online. Total ecommerce revenues totalled $11.2 million in 2020.

PostNord is the most frequently offered delivery service provider among online stores. Of those stores that indicated which service they use to transport their goods, 81% cited PostNord as one of their providers.

The most recent Amazon store to open in Europe, Amazon Poland launched in March 2021, offering over 100 million products across 30 product categories. Amazon has been operating Poland, however, since 2014, making it the country’s largest U.S. employer and third largest American investor.

Amazon recently launched its shopping site in Saudi Arabia in a bid to expand eCommerce business in the country. Amazon.sa is the rebranded portal of Souq.com- the largest eCommerce platform in the Arab world. Souq was acquired by Amazon in 2017.

Saudi Arabia is one of the fastest-growing eCommerce markets, has high internet and smartphone use penetration, and most of the population lives in urban cities. Saudi Arabia is also in the top 20 wealthiest countries by spending power.

Egypt is another core market for Amazon-owned Souq, and thus it is expected to be replaced with Amazon Egypt in the future. Souq generates its largest amount of eCommerce net sales in Egypt. Souq was launched in 2005. As of July 2021, the Egyptian marketplace still operates under souq.com.

With regards to the product range, souq.com is an all-round online store, with products on offer that cover different categories, such as “Fashion”, “Electronics & Media,” as well as “Toys, Hobby & DIY”.

Souq also operated in the UAE until amazon.ae was launched on May 1, 2019. The UAE B2C eCommerce market accounted for US$4 billion in 2019. Amazon.ae heads the list of the online stores by net sales in the UAE (2019). High Internet and smartphone penetration rates help the wealthy nation drive the online sales growth, with a projection of a double-digit increase in eCommerce revenues through 2022.

Amazon launched in India in 2013 with its Selling on Amazon and Fulfillment by Amazon programs. According to RBC, India alone could represent an $18 billion revenue opportunity for Amazon. The firm’s analysis projects that by 2023, India could account for 13% of Amazon’s international sales, and 4% of the company’s total revenue.

India has 480 million internet users, and that’s growing at 25% year over year. Traffic-wise, India is the fourth largest global marketplace.

Don’t forget about those pesky VAT and other seller fees in new marketplaces.

How to Get Started Selling in Amazon Europe Marketplace

Amazon provides a four step process for Amazon sellers to expand their business to Europe:

In other words, it’s not that much different than selling on the U.S. site. Except you have to be able to translate into a different language (even British listings have different spellings) and understand and follow the legal requirements of a particular country.

For more specific instructions, refer to Amazon’s guidelines on how to Build International Listings.

Getting started in these markets with FeedbackWhiz has never been easier. With just the click of a button, you’ll have the expansive functionality of FeedbackWhiz’s powerful tools you’ve come to learn and love – review automation, product and listing monitoring, and deep profits and accounting insights into all your products across all marketplaces – ready to penetrate into these markets.

READ: How can I add multiple marketplaces?

You can easily add a new marketplace directly in your account settings.

FeedbackWhiz users now have the ability to fully automate the functionality of Amazon’s Request a Review Button without the unnecessary addition of browser extensions. Now, imagine automating review requests to billions of new customers around the planet in seconds.

And with the powerful profits and analytics tool, you can aggregate all the important data from all of your products across ALL your marketplaces. Or segment by individual marketplaces to pinpoint which item is your most profitable in specific markets. Oh la la.

Is expanding into Europe a good idea for your business? The best advice we have is this:

Selling in international markets works best if you have a product that would be in extremely high demand in a specific country, or if you are looking to scale a large business that has had a lot of success in your local area. Either way, it’s best to expand into just one new country at first to test the market and get a grasp on the tax laws before growing into another.

Again, keep in mind that you have to list products in the language of that country’s Amazon marketplace and adhere to all VAT rules and other legal regulations. Make sure you fully understand what you are getting into before getting into it.

If you’re considering going transatlantic with your business, FeedbackWhiz can make your entry so much easier. It provides a range of order and feedback management, email automation, product review monitoring and notifications and a profits and accounting tool that works in all the European marketplaces.

Not convinced? You can see the amazing tools in action in our in-depth demo. Best of all, you can try out the software with a 30-day free trial. FeedbackWhiz is your passport to the Amazon European marketplace.

The post Amazon Europe Marketplace Spotlight: Here’s What You Need to Know appeared first on FeedbackWhiz.

Everything You Need To Know About Social Selling

LeBron James Asks Public For Help In the The Murder Of...

Why You Should Keep Your Brand KPIs Simple

How many grandchildren does the Queen have?

How do you target your audience?