The everyday brand ambassador plays an important role in connecting brands with audiences, from educating them on a company’s products and services to delivering samples. But lately, brands are carving out a new, loftier position built for superfans: chief brand ambassador.

To capitalize on their fans’ passion, several companies—particularly in the beer category—have taken the typical brand ambassador role to the next level by recruiting for newly-invented positions with social media-driven responsibilities and cheeky titles. Among them: Chief Cheese Officer, Chief Exploration Officer and official ambassador of the Champagne of Beers region. Unlike the typical C-suite, these employees take home a modest salary and are paid in product (and plenty of clout).

So, what exactly is a chief brand ambassador? To find out, we dug into five examples that highlight what the position involves and what its (far humbler) “executive” searches entail.

It’s known as the “Champagne of Beers,” but Miller High Life doesn’t actually have its own region that produces the beer exclusively in the same way that the Champagne region of France is the only place where true champagne is produced. Miller sought to fix that by submitting a petition to the Milwaukee Common Council to create its own territory, called The Champagne of Beers region, around its brewery in Wisconsin—and then hiring an official brand ambassador to represent it on the ground. The new employee landed a $20,000 paycheck, free beer for a year and an all-expenses paid trip to Milwaukee. The application included a 50-word essay on why they deserved to be chosen for the job.

Frozen cheese snack brand Farm Rich will mint its newest CCO in August, but he or she will not be responsible for leading operations. On the contrary, duties will include eating cheese and creating social media content. As “Chief Cheese Officer,” the individual will receive $5,000 to conduct field research at Farm Rich’s headquarters in St. Simons Island, GA., and support the Farm Rich team virtually for 45 days. Also part of the package: a three-day, two-night vacation on the farm (for said research), a year’s supply of Farm Rich snacks, a wheel of cheese swag and the chance to declare a new cheese holiday. Farm Rich fans, cheese connoisseurs and cheese-heads are encouraged to apply.

Like the Farm Rich CCO, Michelob ULTRA’s new CEO is charged with content creation. The brand hired a “Chief Exploration Officer” to explore U.S. national parks and produce content for the beer’s social media channels. Equipped with $50,000, a decked-out van, gas money, beer and love for a nomadic lifestyle, the new employee will spend six months traversing the country in partnership with the National Parks Foundation. Those interested in the gig filled out a job application and submitted a photo showcasing their nature photography skills with the hashtag #PureGoldCEO.

Last August, AB InBev’s new Bud Light Seltzer brand announced a search for a CMO—a “Chief Meme Officer.” The idea was to imbue some fresh thinking into the brand’s creative and up its meme game for a period of three months (an idea that appears to be gaining traction among marketing departments).

To apply, fans downloaded a set of meme templates to experiment with. The appointee was granted $5,000 per month for the duration of the gig and was required to create at least 10 viral memes per week and share them on social media. Since taking up the job, the CMO has gone beyond the duties of your run-of-the-mill meme officer and pitched ideas like buying a lake, naming it “Bud Light Seltzer” and letting consumers sip from the carbonated water with straws. The brand said no, but at least bought a round of seltzers for fans to replace the shuttered idea.

Yet another beer brand is searching for an ambassador—but this one’s a dog. (Not kidding.) Busch released its first batch of Dog Brew last year, an alcohol-free, nutrient-laden bone broth product that lets beer lovers crack one open with their pooches. This spring, the brand recruited for a Chief Tasting Officer (CTO) to taste-taste, offer quality control and appear on Busch’s social channels. To apply, pups posted a picture on Facebook, Instagram or Twitter with their “qualifications” and the hashtag #BuschCTOcontest. And it’s even a paid position: $20,000 plus pet healthcare coverage and free brew. Not bad for a canine. 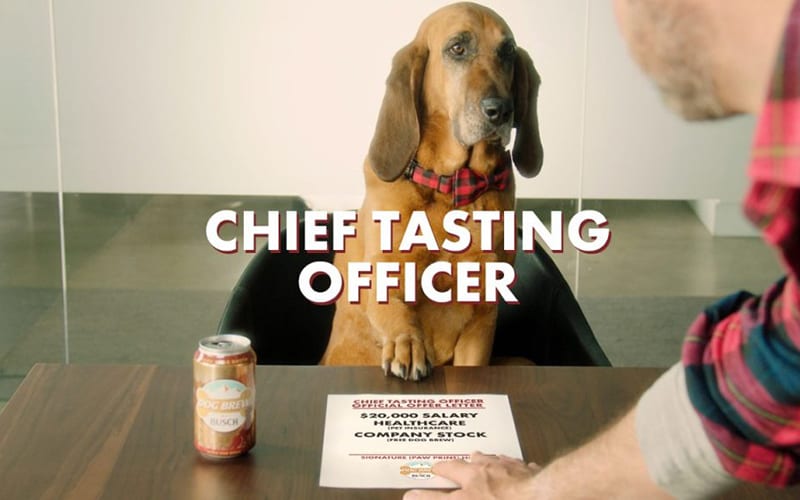 “A friendly face makes such a difference in my quiet days”

Families And Parents Of Color Remain Cautious About Return To In-Person...

Barack Obama Films New ‘How To Vote’ Videos For 17 Different...

CLIP: Swizz Beatz Responds to Critics Who Call Him A Sellout...

The Solution to Au Pairs’ Health Coverage Gaps May Be Simple:...

How to Make Money While You Sleep