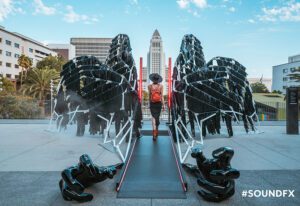 The L.A. installation was built using a blend of 3D printing tech and industrial elements to bring FX’s horror and sci-fi content to life.

FX Networks is renowned for executing largescale, multisensory activations at tentpole events like San Diego Comic-Con. But amid the pandemic, the brand has been exploring new avenues for in-person engagement that allow for maximum throughput, but minimal crowding. The most recent example is the network’s multi-city Sound FX campaign featuring the installation of interactive sound sculptures in New York City, Chicago and Los Angeles in September. The brand partnered with a diverse selection of artists on the installations to bring its most popular series to life and drive home the message that its content is now available for streaming on Hulu.

FX took the opportunity to highlight its breadth of content by focusing on one genre in each city—drama in New York, comedy in Chicago and horror and sci-fi in L.A. Although the network teased the Sound FX installations on its social channels, the sound sculptures were generally meant to be stumbled upon by curious consumers, who could take a self-guided journey through the sound art experience at their own pace.

And for those who wanted to dive a little deeper into each activation, the brand provided an FX Identity Quiz that offered content recommendations based on their responses, and prompted them to stream that content on Hulu.

“With all of our experiential programs, we look to create multiple layers so that fans and participants can engage as deep as they like,” says Kenya Hardaway, svp of integrated promotions-multi-platform marketing at FX. “So it was another layer that we were able to incorporate into the experience where people dig a little deeper, and, of course, drive the message of the FX brand and viewing of the content.”

FX kicked off the Sound FX program in New York City, where its installation surrounded participants in a dramatic, multi-layered a/v experience inspired by the soundscapes of its top original drama series. The brand built a crystalline structure made of two-way mirrors that both fragmented and multiplied reflections of consumers while remixing the reflections with sound-responsive lighting that was integrated into the structure.

Next, the network teamed up with artist Emilie Batz, whose work uses the five senses to deepen engagement with “self and society,” and hit Chi-Town to install the world’s first six-sided comedic harp. Passersby could interact with the sculpture’s metallic strings to get a modern take on soundbites from FX fan-favorite comedies like “Dave” and “What We Do In The Shadows.” The installation was inspired by the visual rhythm of modernist Chicago architecture, as well as the timing of great comedy that the city is known for.

Finally, in L.A., FX erected a sound sculpture using a blend of 3D printing technology and avant-garde industrial elements to bring the network’s top sci-fi and horror series to life, including “American Horror Story.” The structure’s dark wings reflected modern interpretations of the genres and served as a nod to the many angel wings found around the city. At the height of the experience, participants were engulfed in a chaotic blend of audio, before moving into an aural sanctuary of sorts, fluctuating between dissonance and harmony.

“We were working to create an unusual program that people could really see as something worthy of engaging around,” says Hardaway. “It didn’t feel like we were overly selling them, but in the space, they still had an opportunity to hear about our message, to understand the content and to be interested in seeking it out.” Agencies: Creative Riff, New York City (creative, production); SOFTlab, New York City (New York sculpture design); Vita Motus, Los Angeles (L.A. sculpture design).

Step Inside the Sound Sculptures:

The 63rd Annual GRAMMY Awards Has Been Rescheduled to March 14,...

Why Is Personal Branding Crucial for Professional Athletes

This $39 App Will Make Your Business Card Rolodex Digital and...

Where to watch And Just Like That in the UK and...

Black Couple To File Lawsuit Against American Airlines For Kicking Them...

KICKSTARTING MY JOURNEY THROUGH DIGITAL SCHOLAR

The 4–1–1 Strategy for Cultivating a Social Media Influencer