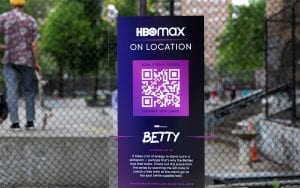 New York City is the backdrop to some of the most iconic moments in the films and TV series available on HBO Max. So to showcase the breadth of its content and celebrate the Big Apple’s reopening after a daunting year, the streaming service developed an interactive, rewards-driven walking tour across Manhattan. The experience served as a self-guided journey through the brand’s extensive catalogue designed to turn fans on to new content and reunite them with long-lost favorites.

Dubbed HBO Max On Location, the three-day outdoor pop-up experience, held June 11-13, featured 20 branded installations around the city. Every stop along the tour gave consumers an opportunity to view content filmed in that location and earn rewards from a local business. Whether fans knew about the activations ahead of time, or stumbled upon them, tour installations were easily recognizable thanks to a 10-foot-tall, branded purple pin anchored to each site and an accompanying kiosk bearing a QR code.

To activate each experience, consumers scanned the QR code with their phones, which automatically triggered access to a clip from a movie or series filmed in that exact spot. After viewing the content, they entered their contact information to receive a reward from an HBO Max partner or a local business affiliated with the location, while supplies lasted. After interacting with the experience from select locations, fans could grab a free bike to travel to other stops around the city as part of a partnership with Citi Bike (sponsored by Lyft).

“We were really inspired by the fact that there’s going to be a lot of tourists who are coming back to New York City who might not have been in the city for a really long time, and just leaning into what tourists typically do, which is walk around and see locations and key landmarks,” says Dana Lichtenstein, vp-brand marketing at HBO Max and HBO. “We felt there was an opportunity to let people feel like they’re a part of our stories and worlds by taking them to the exact locations where some of their favorite [entertainment] moments occurred.”

Tour installations were spread throughout Manhattan, but six stops were located in the city’s Washington Heights neighborhood to celebrate the release of “In the Heights,” a Warner Bros. Pictures film set in the area, that debuted on HBO Max (and in theaters) in June. To further highlight the movie and its setting, HBO Max partnered with NYC & Company, which curated a supplemental guide to the neighborhood.

From revisiting that scene at Katz’s Delicatessen in “When Harry Met Sally” and earning a $5 deli coupon, to reviewing the Toussaint necklace scene at the Cartier Mansion in “Oceans 8,” which yielded a $5 Lyft credit, there was a little something for everyone who participated in the rewards-driven walking tour. And that was the idea—to illustrate that HBO Max’s variety of content appeals to a range of entertainment lovers. Among other films and series that were highlighted on the walking tour: “Gossip Girl,” which is being rebooted on the service on July 8, “Elf,” “Sex and the City,” “Succession” and “The Undoing.” 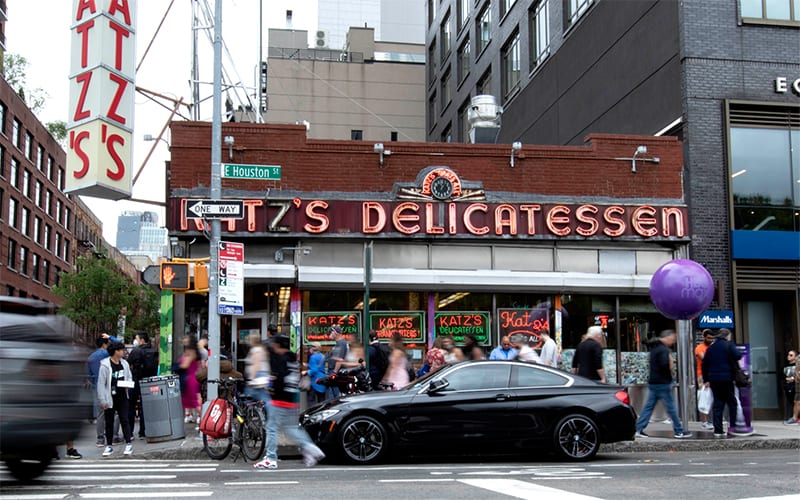 HBO Max spotlighted local businesses affiliated with its content, like Katz’s Deli, which appeared in When Harry Met Sally.

For HBO Max, a critical aspect of the program was the integration of local partners like Magnolia Bakery, United Palace Theatre and Levain Bakery, whose businesses have suffered amid the pandemic.

“We were driving people to neighborhoods where our content was filmed, but we also wanted to support these local businesses who had been so negatively impacted by COVID,” says Lichtenstein. “So for us, it was an opportunity to not only plus-up the experience with rewards for the fans who go along this journey with us, but to also help drive traffic to these businesses that were really hurt over the past year.”

Social media was also part of the strategy. Influencers and campaign partners spread the word on their channels, while media partners like Thrillist did the same to drive consumers to the installations. “It was less about doing the recap afterwards and more about making sure people were aware that it was happening so that they could experience it,” says Lichtenstein.

HBO Max On Location is just the beginning of the brand’s post-COVID experiential marketing strategy. Lichtenstein says fans are “craving in-person connection” and HBO Max will be there to fill that void with plenty of events and experiences in the months to come. In other words, stay tuned. Agency: Civic Entertainment Group, New York City.

Aldi is selling a Benefit bronzer dupe and it’s proving to...

Pregnant Woman And Unborn Child Shot to Death In Philadelphia While...

Retooling Research to Properly Measure the Short and Long-Term Effects of...

Save 25% on Meghan Markle’s pram with this Black Friday baby...

#KnowyourMIV: The Top 10 Chinese Influencers for Beauty you should know