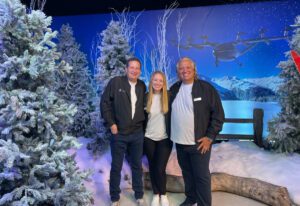 Attendees could participate in photo ops that highlighted how the Archer Maker enables micro-exploration.

It can be difficult to envision a future where electric vertical takeoff and landing (eVTOL) aircraft are an everyday form of transportation, so to showcase how it will help usher in the era of urban air mobility, eVTOL company Archer hosted a hybrid launch event for its Maker aircraft.

Leveraging cutting-edge extended reality and gaming technologies, the brand activated a mass simulation that took attendees on a ride inside the Maker, and showcased the possibilities of “micro-exploration.” Consider it a world-class theme park attraction—built for one day.

The launch was hosted live in Los Angeles in June for 100 influencers, media members, investors and strategic partners, like United Airlines, while many more joined the experience virtually. The event was purposely designed to mimic a theme park dark ride experience: Attendees first arrived in a lounge area, then walked through a tunnel and into the main experience. When the presentation ended, attendees walked back out to the lounge, which had been transformed into a series of photo booth experiences.

The main presentation was kicked off by Archer founders Brett Adcock and Adam Goldstein, who shared their vision for the future of the eVTOL industry. The founders differentiated Archer from other emerging eVTOL companies, which often position themselves as Ubers in the sky, by underscoring how the brand will provide consumers with the opportunity for micro-exploration. An example: Say someone lives in L.A.  and wants to go mountain biking in the California hills. The trip would take an hour by car, but 10 minutes in an Archer Maker (the aircraft can fly at 150mph for distances of up to 60 miles). The idea is that the time saved by flying vs. driving paves the way for consumers to partake in more mini excursions.

After the intro it was the big reveal moment. Accompanied by visuals on side screens, a dramatic score and live instrumentalists, Archer dropped the kabuki and revealed the Maker aircraft on-stage, parked on a futuristic landing pad. Attendees were then immediately immersed in live action footage in which the Maker was flying “at” them, replicating a flight over the coast of California, Mount St. Helens and deserts in California and New Mexico.

“There was this thematic story, and that piece was 60 seconds,” says Kenny Taht, chief creative officer at Archer. “So it was just stunning, in-your-face, mind-bendingly beautiful—and then it was over. It was like an amazing roller coaster ride. We wanted to leave people wanting more.”

After the 60-second “roller coaster ride,” Adcock and Goldstein offered a few more remarks then stepped inside the Maker to partake in a flight simulation recorded with true extended reality technology. That’s where the real magic happened. The founders “flew” from L.A. to the desert, taking attendees along for the ride across natural landscapes, and ultimately landed at an eco-port (a sustainable, WeWork-style space in the wilderness).

This application of XR, to Archer’s knowledge, has never been leveraged outside of a TV or movie production set—and it was no easy feat. What sounded like a lofty yet manageable idea during the planning stages when the team was still in COVID lockdown proved to be much more challenging when it came to engineering the experience IRL. To implement extended reality in its truest form, Archer and its partners leveraged camera trackers so that the cameras around the background scenery moved relative to the camera position. The brand also had to check the eye-line of every seat in the audience, incorporate 3D audio, build a massive 2,400-square-foot XR volume (the 3D space where the technology was put into play) and haul in steel and concrete to create temporary supports that held the entire system up.

What’s more, Archer synchronized the point of view of the experience so that both live and virtual attendees had the perfect perspective. Taht says the endeavor required a fleet of engineers, artisans and what he calls “A-plus-plus geniuses.”

“It was honestly a pinnacle experience for everybody involved and everyone on the crew to build an LED volume that big,” says Taht. “The power of that XR technology to move the background relative to the audience is incredible, because it really is what gives you that suspension of disbelief.”

When the main presentation wrapped, in-person attendees were invited down to the stage to get a closer look at the Maker and snap a few selfies. Then they headed to the lounge for an afterparty where they mingled, sipped cocktails and participated in Maker-themed photo ops, like a ski resort scene enhanced by a fake snow-making machine in which a Maker could be seen landing in the background.

“In an increasingly hybrid world with XR and VR and AR and people interested in media- enabled experiences like that, this is just the beginning,” Taht says. “For somebody involved in creating experiences for people, the exciting thing is the world just got a whole lot bigger… With XR, you can transport people to places they’ve never been before and that haven’t existed before. And it’s so convincing to people, the suspension of disbelief is so real, that you will transform people’s hearts and minds.” Agencies: PRG Events (creative, technical production); GFX Creator (content); Super 78 (aerial photography); LaunchSquad (p.r.).

The post How Archer Built a Theme Park-Style Attraction to Launch its New Aircraft appeared first on Event Marketer.

Train to Become a Confident Public Speaker With This $40 Bundle

Nikole Hannah-Jones Calls Out Jay-Z and Will Smith’s Rent-To-Own Venture As...

Applications Open For The Coalition To Back Black Businesses 2021 Grant...

The Types of Influencers in the Industry

Facebook Intends To Buy Up To $100 Million Worth of Invoices...