Setting the stage for what hybrid music festivals can deliver to both attendees and brand sponsors, the 2021 iHeartRadio Music Festival went live Sept. 17-18 at T-Mobile Arena in Las Vegas with in-person performances and experiences for consumers. Hosted by Ryan Seacrest, the festival also included a daytime stage and brand experiences on Sept. 18 at the new AREA15 experiential retail and entertainment complex.

Fans could livestream the iHeartRadio Daytime Stage presented by Samsung Galaxy via the LiveXLive platform and app, which featured exclusive content captured backstage in addition to the performances. The CW Network also exclusively livestreamed both nights of the festival, and then aired a two-night television special Oct. 2-3 featuring the festival’s top performances and highlights. In addition, iHeartRadio personalities hosted interviews broadcast across iHeartMedia radio stations in more than 150 markets and on iHeartRadio.com.

Gayle Troberman, cmo at iHeartMedia, says that more than 15 billion social impressions were delivered for the event, both before and during the on-site experience. Engagement on-site included QR codes that led to special perks including a custom Instagram filter for sponsor T-Mobile, the ability to vote on Samsung’s activation acrobat movements (more on that in a minute) and the chance to win special prizes from iHeartRadio. The first iHeart Music Festival NFT was also introduced to raise funds for climate change causes.

Brands want meaningful, frequent fan engagement at scale in this new era of sponsorship, Troberman says, so it made sense to create a diverse lineup of artists, and combine broadcasting and virtual elements with on-site activations to democratize music and make it more accessible to ticketholders around the globe.

“The festival was a massive success—you could feel the energy as we reimagined music and festivals post COVID and provided consumers with a powerful experience,” she says. “Artists and brands are coming together towards this blurred line between virtual and live worlds.” 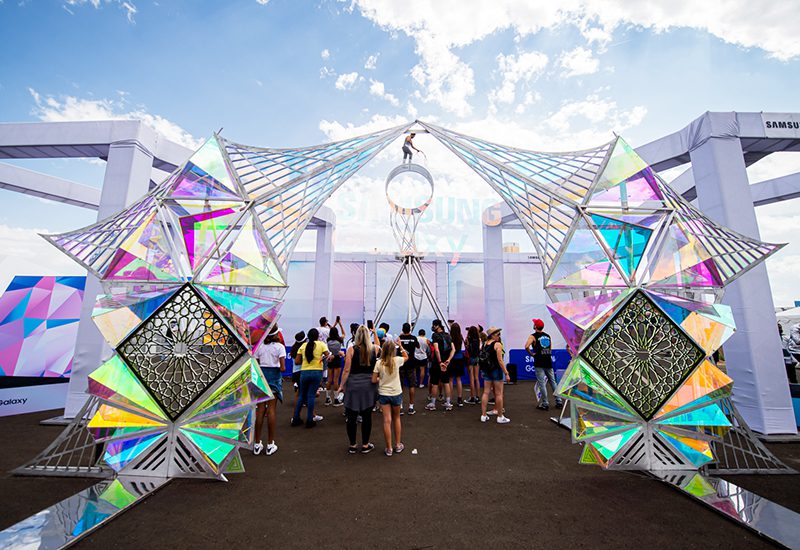 Partnerships with brands like Capital One, Rohto Cooling Eye Drops, Sprouts Farmers Market, Advil, Excedrin and Voltaren presented fan experiences including an exclusive meet-and-greet with singer Khalid for a limited number of Capital One cardholders who purchased a Capital One Access Pass along with a festival ticket.

Among activations: The CW’s large social lounge, where guests could take Instagram-worthy photos amidst glowing, swinging sculptures; a mirage-in-the-desert slide for Arrowhead Mountain Spring Water’s nature-themed space that led consumers into a simulated mountain spring reflective pool decorated with oversized greenery; and a T-Mobile-sponsored VIP viewing platform for the daytime stage surrounded by lawn games, a more than 60-foot diameter patchwork shade courtesy of Do LaB, Los Angeles, (similar to those at Coachella and Burning Man), as well as a zipline across the festival grounds.

iHeartRadio Music Festival presenting sponsor Samsung activated an interactive “Samsung Galaxy” centered around the Z Flip phone. Guests took a journey through art, technology and performance installations including a giant, immersive kaleidoscope that they could enter and watch themselves “flip and fold.” Using Samsung phones, attendees could also download custom filters and direct the tricks that live acrobats performed live.

In order to make the event as accessible as possible, testing and preparedness were key. Fans were welcomed at various points of entry, and activations were made to be open air, free-flowing experiences that eliminated long lines and allowed attendees to view the action from almost anywhere in the festival space.

“We were excited, brands were excited, to really reimagine this moment of coming back to real life entertainment, live and in person,” Troberman says. “What was new in strategy was the ability to do amazing, in real life experiential opportunities on site, and also do virtual experiences, and to bring the virtual and real life together in new ways.”

See the Sponsor Activations in Action:

The post How iHeartMedia is Scaling Music Fan and Sponsor Engagement appeared first on Event Marketer.

Come sail away on a far-from-ordinary Canary Islands adventure

‘The Rock’ Surprises Former School Custodian Who Went Back To College...

Shark Cyber Monday deals: save £170 on the Shark Anti Hair...

Swizz Beatz Gifts His Manager A 20-Carat Diamond Bracelet for Her...

Check Out These 5 Most Popular Budol-Worthy Items Among Filipino Shoppers...

Going Above and Beyond to Design Inclusive Experiential Events

Save £170 on the Nespresso Creatista Plus coffee machine with this...