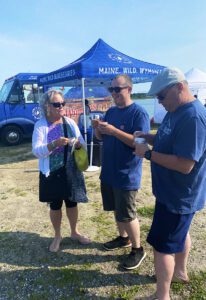 At each stop, consumers can try a free 2.3-ounce sample of Wyman’s Just Fruit Cups product.

The average consumer can’t distinguish between wild and cultivated blueberries, if they recognize that there are two types at all. Maine-based frozen fruit brand Wyman’s is on a mission to change that with help from two alumni of the Oscar Mayer Hotdogger and Planters PeaNutter brand ambassador programs.

The 147-year-old family-owned company is marking its first foray into brand marketing with a summer mobile tour aimed at delivering wild blueberry education and connecting the dots between Maine, Wyman’s and the wild blueberry category. The brand is traveling up and down its home state through early fall with a pilot program it hopes to take national in time for its 150th anniversary.

The anchor of the Bee Wild mobile tour is a vehicle designed to look like a flatbed truck carrying a wooden crate brimming with wild blueberries, along with wildlife imagery associated with the state of Maine. Wyman’s vision is to one day have a can’t-miss tour vehicle that resembles a giant blueberry driving down the road, similar to Planters’ and Oscar Mayer’s iconic mobile units, the Weinermobile and the Nutmobile. To help lay the foundation, the brand hired a former driver from each brand to serve as brand ambassadors for its summer tour.

“Even if we had the best program and the coolest vehicle, 80 percent of it is who are you going to get to staff it?” says Colleen Craig, former Hotdogger and current brand manager at Wyman’s. “We thought, if we’re piloting this program, we’re going to give it the best chance of success if we have the right people behind the wheel. And they’ve just been fantastic.”

More on This Topic:

Before officially hitting the road, the Bee Wild truck was “released to the wild” by Maine governor Janet Mills at a major press event. Since then, Wyman’s has been stopping at a variety of events and hosting its own pop-up activations across the state to get a feel for the kinds of venues and event types that will make the most sense for the brand in the future when it takes the tour national.

Among stops on this year’s tour: parades, food truck festivals, summer camps, the Maine Outdoor Film Festival, Portland Sea Dogs games and L.L.Bean’s flagship store, where it parks next to the retailer’s Bootmobile, providing consumers with a unique, Maine-centric photo op. The tour will culminate with a free community event that Wyman’s will fund at the Milbridge Commons Wellness Park in September. “We’re just trying to reach as many people across the state as we can versus having one big keystone event,” Craig says. 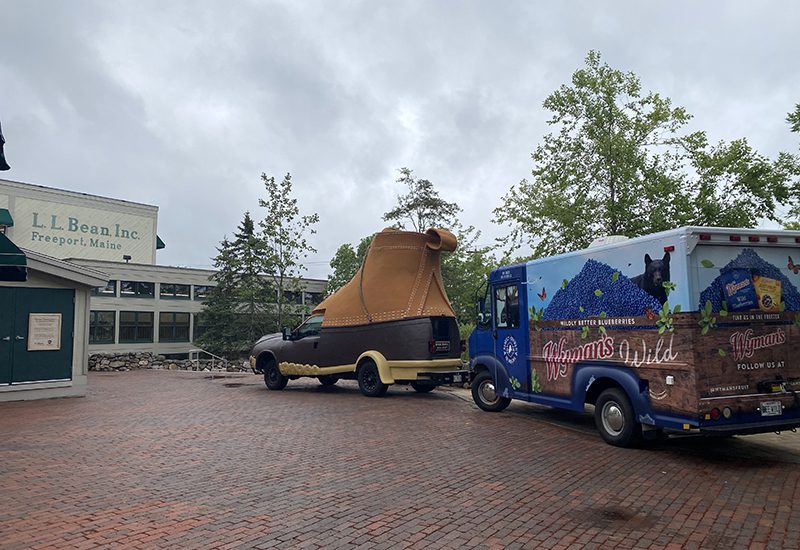 Wyman’s teamed up with another Maine-based brand, L.L.Bean, to drive buzz for its summer campaign.

Attendees can also learn more about wild blueberries—like the fact that they only grow in Downeast Maine and the Canadian Maritimes—and chat with the brand ambassadors about the flavor combinations they’d like to see in future Just Fruit Cup products, giving Wyman’s real-time customer feedback. And then there’s the soundtrack: a dedicated Wyman’s jingle that plays on a 10-minute loop at every stop.

“In Maine there’s a 90-day window in the summer when the population just surges,” says Craig. “So it’s like, how do we use this vehicle to continue to solidify in people’s minds the connection between Maine, wild blueberries and Wyman’s so when—we call them our ‘pollinators’—when they go home, they tell their friends and family, but also when they’re at the grocery store they pick up a bag of Wyman’s because it’s a good memory and reflection back on their time in Maine.”

First-look of Prince Charles and Princess Diana in The Crown Series...

Target Commits To Spending More Than $2 Billion With Black-Owned Businesses...

Make Sure These 5 Items Are Handled Before Starting Your New...

Bark Up The Dog-Training Tree With This 6-Course Bundle

Country Music Star Mickey Guyton Opens Up About Running Away From...

360i Named a Finalist for Campaign US Agency of the Year